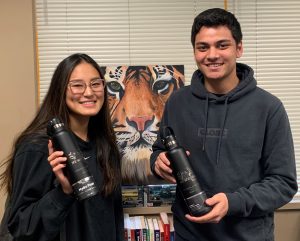 Sicily is a key contributor on the NHS girls basketball team.  Her on-the-court accomplishments are a direct reflection of the work ethic and commitment she exhibits every day.  Sicily is the spark and the heartbeat of the basketball team and takes her role as a leader seriously.  Sicily has a knack for bringing a group together and motivating a team in ways that are palpable.  Her meaning to the basketball program is immeasurable.

As committed as Sicily is to her craft as a basketball player, she is even more committed as a student.  Sicily takes honors classes and excels in her academic performance.  Sicily has a drive to excel in all she does and is a great role model for the players in our program.

Sicily has integrity.  The coaching staff never has to worry about whether Sicily is doing what is expected.  Integrity is one of the most important qualities in a human being and Sicily has it.

Zach is a quiet leader, always leading by example.  He is consistently one of the hardest workers in practice, and it has paid off in games.  He has had a great start to the season, sometimes being our leading scorer and one of our most consistent perimeter shooters.  His success is a product of his work ethic and consistency to a high standard of excellence.  He is a key part of our team, serving as a leader through his example.

Zach is always reliable when we need help with youth tournaments, clinics or camps.  He not only completes tasks that are assigned to him, but he looks for other ways to get involved and help out.  He takes initiative and works to support others in whatever ways he can.