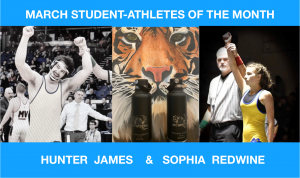 GPA: 3.54
Team: Wrestling
Hunter capped off his high school wrestling career by winning the State Championship at 195lbs.  His 6-3 victory secured his first state championship and was the crowning achievement in his senior year.  Hunter finished the high school season with a 43-3 record.
Hunter’s leadership helped guide the Tigers to a Wrestling Team State Championship.  His daily work ethic and commitment to excellence set the tone for his teammates.

GPA: 3.52
Team: Wrestling
Sophia had another impressive season, winning the Girls Northwest Regional Championship and finishing 2nd at the Pacific Conference District Tournament.
For those who think wrestling is an individual sport, Sophia’s selfless decision to compete in the boys state championship was a true example of giving up personal glory, to benefit the team.  While Sophia would have most likely been a repeat state champion in the girls division, she chose to wrestle in the boys division, with the hope and belief that, while she may not be the state champion, she could score team points to help the Tigers win a team state title.